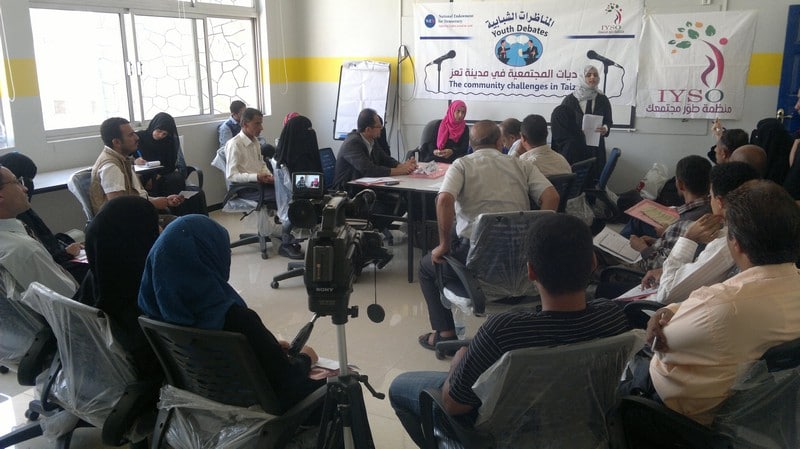 A DEBATE AMONG YOUTH ON THE EDUCATIONAL CHALLENGES IN TAIZ CITY

IYSO has organized the second youth debate to discuss community challenges in Taiz city as part of the peace project through the dialogue implemented by IYSO in Taiz city, which aims to address the social challenges through dialogue between youth and relevant stakeholders in society.

The focus of the debate where on the issue of education in Taiz city under the current circumstances and also on the demand to close private schools and public schools as calls demanded by the protestor teachers in the arena of rights and freedoms who they are demanding their salaries that had been cut off 10 months ago. They also claimed that many families will not be able to enroll their children in private schools as a result of the current conditions.

The discussion has taken place between a team supporting the closure of the private schools and an opposite group for the idea and each team was justified in defending its opinion and recommendations were issued stressing on the importance of continuing the educational process, considering that education must be obtained, whether in private schools or the public ones .They also said that standing against the work of private schools will not solve the problem but will exacerbate it. Among the proposed solutions is that everyone works to increase pressure on relevant institutions, including the Education office and local authority to do the duty and demand the rights of teachers and provide school needs of books and other requirements for the academic year.
The interviewees also stressed on the view that at least private schools should suspend the study for a period of time to solidarize with teachers in the government sector in order to keep pressure on the local authority to hand over their dues.

The event was attended by a number of participants from community organizations, civil youth initiatives, teachers and directors of public and private schools, social activists and academics, as well as teachers from the protesting arena .