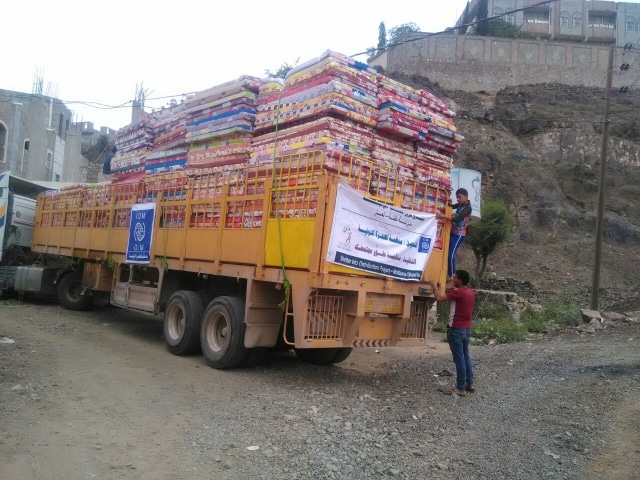 As part of  the humanitarian response projects, IYSO  implemented the second phase of the project of distributing the hygiene kits for displaced people in the District of Maqabneh in Taiz  governorate, funded by the International Organization for Migration (IOM).

The second phase of the project targeted  400  displaced family in the targeted areas, Hajda and the villages near the area of ​​Barih Arish within the scope of the District of maqbana , and the  hygiene kits contained  mattresses, blankets, kitchen tools , tarpaulins and  plastic “utensil” to fill water in .

The distribution process was proceeded by a field survey carried out by the team of  IYSO , where 400 family were registered according to a specified  criteria and mechanism for  selecting the targeted beneficiaries . In addition, an organized mechanism for the distribution of the hygiene kits was designed to deliver the  hygiene kits to the displaced people  through their delivery cards based on an  accurate database  for all targeted families in which it ensured avoiding forgery or duplicates in registration and distribution.

The beneficiaries had expressed their thanks and appreciation for IOM and IYSO for all the efforts had been made to improve the conditions of the displaced people through providing them with the urgent humanitarian relief represented by the hygiene kits.

It is important to mention that the displaced families who were targeted by the project  were suffering from difficult humanitarian circumstances and this project funded by IOM and implemented by IYSO came to meet the urgent humanitarian needs in the targeted areas where the displaced people exist in .